Home » Education , Jobs » Read Five Must Avoid Words To Use During Any Job Interview

Read Five Must Avoid Words To Use During Any Job Interview

Posted by Admin Posted on 03:36 with No comments 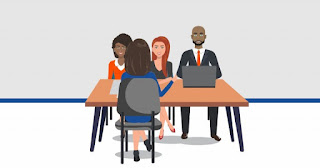 Getting an appointment for job interviews seems to be difficult, while many make unnecessary or careful mistake when they are opportune to have one. Interviews can be really tense experience especially for first timer. Though this depends on the panel of interviewers you meet.

Every job interview presents an opportunity to land you a job of interest but we must find out those things you should never say especially when you want to stand out as the best candidate for the position.

1. Never make use of the word ‘Yeah’ for Yes
If there is anything we are guilty of is making use of the word “Yea”. I must state that the word is not formal and interviewers find this irritating. Sometimes, it is so bad that the look of irritation becomes visible on the face of the interviewer.

Like i said earlier, the word ‘yeah’ is never formal. It is a casual conversation word used when hanging out with friends or family members. Note- No matter how qualified you think you are, making using the word ‘yeah’ instead of ‘yes’ can ruin your chances of getting hired.

2. Avoid ” l don’t know ” for an answer
There are times when the interviewers will throw difficult questions at you make sure to come up with something rather than replying with “I don’t know”. I question with this form of answer makes you like rude, clueless and lack initiative.

We are not saying in anyway that hiring managers don’t want you to upgrade or improve your skill-set with a certification. Having to recruit for the same role over the next few months is not ideal for companies because is cost-effective. Even if you intend going bank to school better keep it to yourself as no organization wants to hire who would not give them the value for time and money.

It is unacceptable telling the interviewer how you hate your last job. Be civil, positive, do not lie and be formal. When interviewer demands to know more about your relationship with former colleagues and boss, be kind to share but at the same time let your words be few.

5. “Allow me to take this call”
The first thing every serious individual/ job seeker do is to put of his or her cell phone before and during interview. You should never put yourself in a situation when your phone rings to distract you from the interview.

Putting your cell phone during an interview would directly threaten your chances of getting hired. It is not advisable allowing your phone ring in the middle if such serious business and never ask for permission to answer the call.